This will be the final foundation to be poured for our company in 2010 for a new custom home. You may recognize the site from a previous post about the original home, it was being removed by Nichol Bros. house movers.

Last week, we were not very happy with the snow and freezing temperature because of having to delay the pouring of these foundation walls for a few days – until Friday. The weather reports were quite assuring that we would have warmer temperatures starting on Thursday, but we were still nervous!  We really wanted to get the walls poured so that the screenings could be placed and the ground seal poured, incase there is another early freeze.

So far so good, the weather did cooperate and the walls were poured on Friday afternoon!

The footings as shown below were prepared and poured before the foundation walls could be started.

Once these were ready, the forms for the foundation walls were installed on top of the footings concrete.

The next photo shows an angled section that through out the construction of this home will provide extra interest, as it is a dining room that is surrounded on three sides by tall walls of windows and doors. This room should prove to be quite stunning! 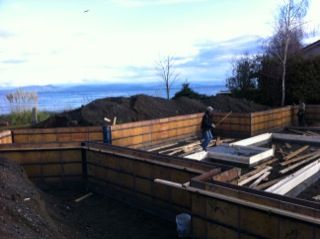 The final picture is a close up of the form work and the steel rebar that is placed within them to provide the extra strength that is a part of a solid foundation.

Unfortunately these photos are all in a small format, they were taken with an iphone and I could not figure out how to enlarge them.

This foundation will look much different by the end of next week, and with larger photos it will be easier to see as well!

Check out our Ideabooks on…